we are the karma kids

by The Karma Kids 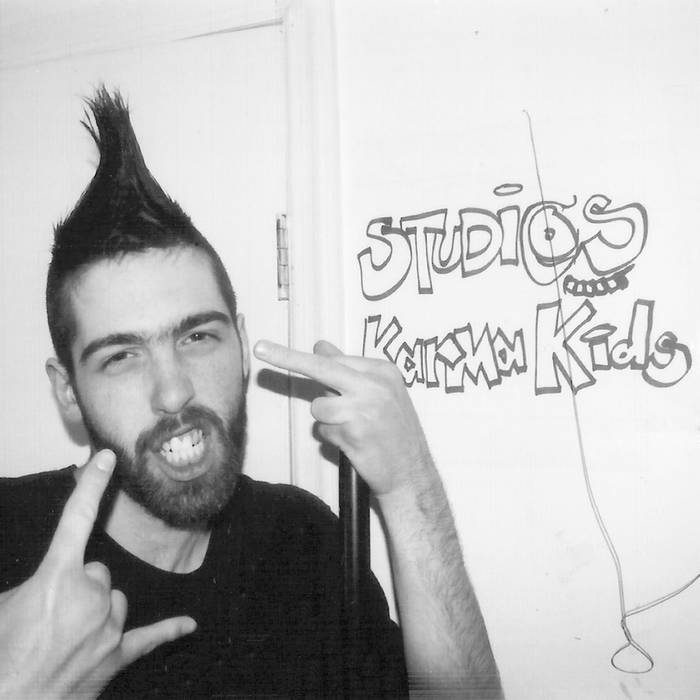 Starting with the album Webtrip in 2013, The Karma Kids — Lt Headtrip, Samurai Banana, Gruff Lion, Duncecap and Googie— released over a dozen albums and performed hundreds of shows in their busiest days, taking their unique music and untamed stage antics all over the United States. In the height of their creative conquests, the prolific wolf pack began a group project with the aim of bringing maximum ferocity to their faithful audiences and beyond. Deemed too savage for an increasingly docile, vulnerable world, the album was shelved indefinitely. Now, after years of constant brutality and, in turn, forced maturity and growth, the planet is prepared for the Karma Kids’ long fabled group album. Conjured from the legendary vaults of Karma Studios, this is the soundtrack to five ferile musicians' frolicking rampage. Fervid tracks about food, sex and elevation, expertly delivered by NYC’s notoriously unrestrained art rappers.

by the time googie, petrow, and web joined me (headtrip) and banana’s team, we had already become a monster. we all went to college together and were loosely associated, but we reassembled in 2013 as a force. each of us were intensely motivated to realize art as a lifestyle and, despite our fierce individualities, we vibrated higher when united. those dissonant harmonies led us to a glorious run.
hip-hop carried us deeper into the vibrant culture of new york, up through the dive bars of new england then  across the states to house parties in the south, and whatever we could wrangle out west, making friends and impressions everywhere.
when we were home, we worked, drank, smoked and ate. each of us took on as many roles as possible with the goal of elevating watkk to its full potential; we wore stacks of hats and our output was recorded as often as feasible. inevitably we hit the studio with more prolificness than we could keep up with. we were one another’s friends, roommates, coworkers and inspiration, and were immersed in a scene of other like-hearted, brilliant individuals.
i unearthed this music a couple years after we’d all moved into new apartments, away from the dionysian dens of karmastoria. some tracks were fully composed, some were in pieces, and a couple were barely songs at all. in a mad rush, i compiled them alongside a few other projects before i left nyc to travel indefinitely. willie green let me utilize his studio for an entire day, and i patched the album up with presets and advice from a respected colleague, then took the  album on the road.
i’ve tinkered with the record over the past two years, and waited for an ideal moment to unleash it. there’s no time like the present, and i think we could all use one after a trying conclusion to four exhausting years. i recall samurai banana’s introduction before our set at yule prog 8, social justice protests raging outside drom’s doors. “some art tackles social issues directly, breaking down constructs and posing new solutions or simply defying tired standards. other art is here to distract, to offer a moment to celebrate a better life to those who fight for it. we are the latter. let’s have some fuckin' fun!”
i proudly count these people among my best friends, inspirations and most thoughtful humans i’ve known. this is a snapshot of a brief, brilliant spark in our existence. we are the karma kids.

Hath frontman Frank Albanese stops by on a supersized, year-in-review edition of the Metal Show.