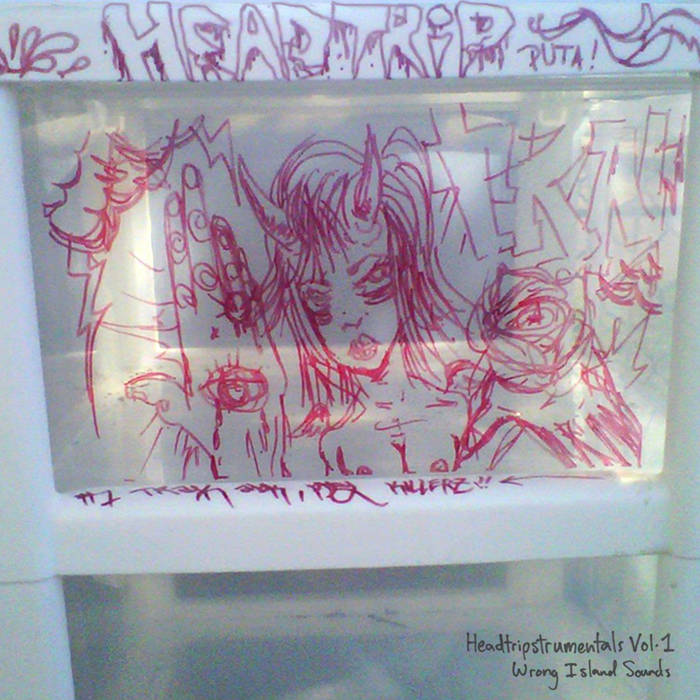 On any given evening of 2008 in a tiny unassuming house in Hempstead, NY, deep through the haze of tobacco and blunt smoke, you could find a group of punks, potheads, scholars and drunks bouncing philosophical queries and vulgarisms off one another. If you dared to maneuver down the narrow steps into a cloudy basement, stepping over semi-functional music equipment and barely-dressed mattresses, cans of Chef Boyardee stuffed heavy with old cigarette like land mines, you might find a young Headtrip, plugging away at a tiny computer desk, chopping up the music from a Betty Boop cartoon, forty of OE precariously balanced next to his ash-covered macbook.

This collection of instrumentals originally appeared on various albums I recorded while living in Nassau County, Long Island 2006-2010. I moved to New York to make music, and school seemed like the easiest way to get there; I was a decent student and was offered some scholarships from Hofstra University, so I signed up. When I finally got there, I realized that Hempstead was 45 minutes and a pricey train ticket from the city— I’d landed on the wrong island. I made the most of my location, cramming all my classes into two or three days a week so I could write and produce full time, and started seeking out companions. Samurai Banana, my new friend and main collaborator, put me onto a wealth of rap I hadn’t indulged in much— mostly funkier mainstream rap that I’d brushed off. He also taught me some production techniques and shared his software with me, and we began a years long competition of beat making. Our friend group, fed up with the tyrannical rules of the university and their macho ex-cop security team, moved off campus to our home for the next two years, 55 Clemente. Our roommate Tim Lee had started a punk band, the Broosevelts, and as I helped them record demos and throw drunken basement shows, I fell in love with filthy, raw punk rock, and my aesthetic slowly shifted toward an even grimier sound. I even learned my way around a drum kit and started a crappy punk band.

Beyond my friends’ music, I found myself diving into classic musicians such as Lead Belly, Billie Holiday, Cab Callaway and whatever I could get my hands on. Back in the early 2000’s, finding rare, odd albums online was much easier. My homie Waysdorf would download a dozen albums using Rapidshare and put me to work. There were also musicians stopping into Clemente constantly, and I would hastily mic and record their demos in exchange for some sampling usage of their outtakes. All of these flavors and influences are present in this collection of my early production.

These beats are not for sale, but for listening. If you’re interested exclusive production rights to similar instrumentals, holler. I have plenty in the vaults.